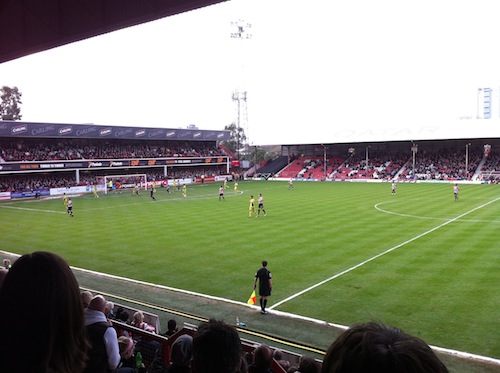 Finally, I got to go and see a football match at Griffin Park. I attended my first ever game of football here, aged eight. I can count on one hand the number of times I've been to the football since (including that one, and this one) but it's been an important part of the experiencing the culture of different cities I've lived in,  so when I came back I felt very strongly I wanted to go back.

I enjoy watching football. Especially in the smaller teams there is a great buzz in the air and the chants often make me laugh. It's an easy sport to watch without being an expert, too - I have no idea about the off side rule and of course there are many such subtleties, but anyone can admire a good tackle and tell not only whether the ball's gone into the net or not, but roughly how well a team is playing from how much they seem in control, and how often they get the ball near the goal.

I saw the Bees in luxury, too, which was a rare treat - excellent seats and private bar and food beforehand, all thanks to my kind friend Natalie who sorted me out my ticket. Yes, as many people have told me, it's the prawn sandwich brigade (or shepherd's pie, actually) but it was nice and she and her family are very long term supporters of the club: they're definitely the real deal.

Unfortunately they lost: my run of previously only supporting the winning team in even the most unlikely circumstances (I have no idea what happened when I was eight but Perth Glory, Plymouth Argyle and Manchester City all won in style when I was there to see them) has been finally broken. 0-2 to Sheffield United but still Sheffield needed the points and the Bees are probably better consolidating rather than being promoted this season... I'm told.
An occasional post by Bridget at 11:49 PM