100 things: Strand on the Green

I grew up near Strand on the Green, and am living back there now. From going to see the ducks and the window with the Wild Things toys as a small child, to Christmas Day walks, to inadvertently biting a piece out of a pint glass when trying to impress my friends as a teenager, to these days using it as a slightly more sophisticated venue for a drink, I've probably been along there hundreds if not thousands of times and it's still one of my favourite parts of the river.

The first photo is the view from Kew Bridge - as someone said to me last night, crossing any bridge over the Thames in London is always good for appreciating London.  Then Cafe Rouge, not quite on the river (though it's called Thames Road here), but a favourite venue for meeting up for citron pressé, and Rose Cottage where Nancy Mitford apparently lived when writing The Pursuit of Love. 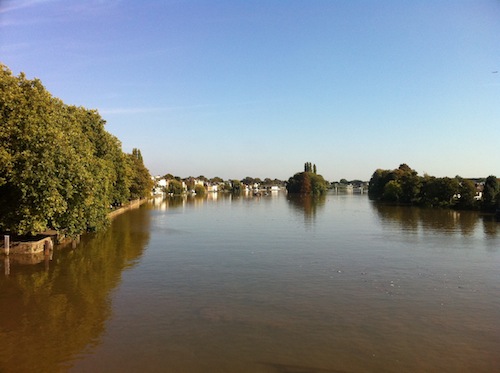 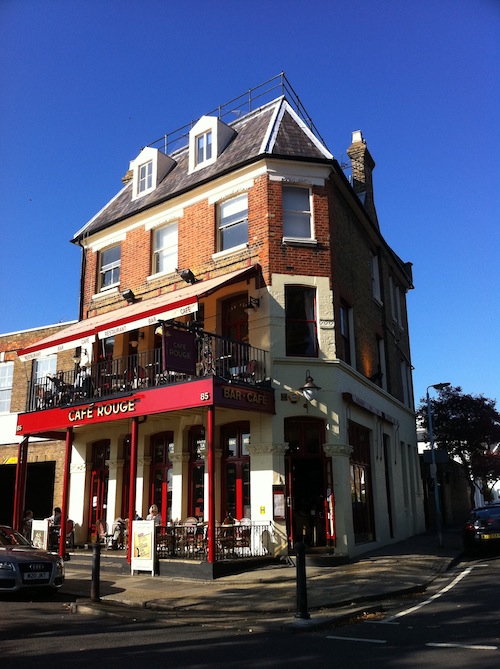 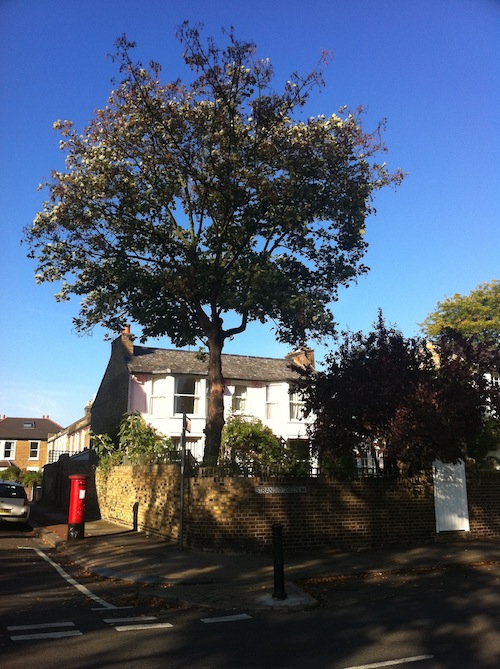 < One of our favourite things to do as children was to walk along the wall. It extends along quite a long way from Kew Bridge to where Strand on the Green proper begins. We were never allowed to walk on the bit shown in the photo when we were smaller and so I still think of it as more dangerous - right next to the river, obstacles in the shape of those bollards - but parts of the rest of it are still encroached on by bushes and low hanging branches enough to give us a thrill. The tide was very high when I took these pictures - on spring tides the water can come right up to the houses and they all have flood defences. Also pictured is the first of Strand on the Green's three pubs, all of which have experienced various guises since I was little, and have become increasingly gastro-pub-ised. The Bell and Crown is good for the additional seating along the river wall on a nice day. 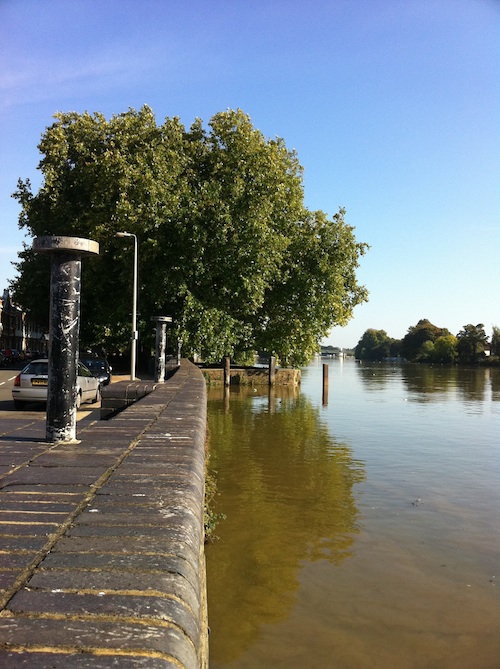 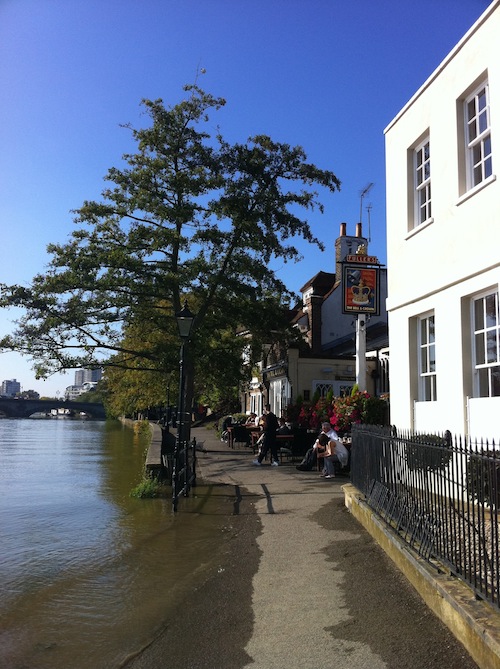 The Bell and Crown is where the towpath proper begins. There are lots of things I remember being fascinated with when we were little: the big overhanging willow trees, the swans, the toys in the window (though I think someone is keeping up the tradition in a different window, now, and the toys look older and dustier) and the steps and barriers between the path and the houses to keep the river water out. 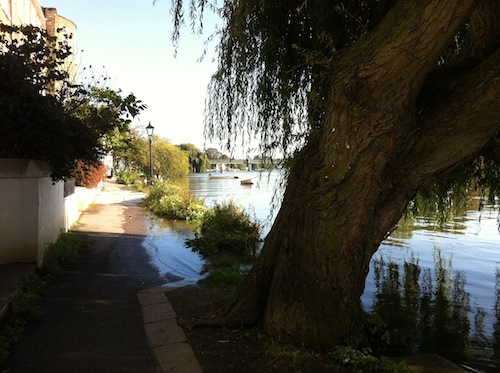 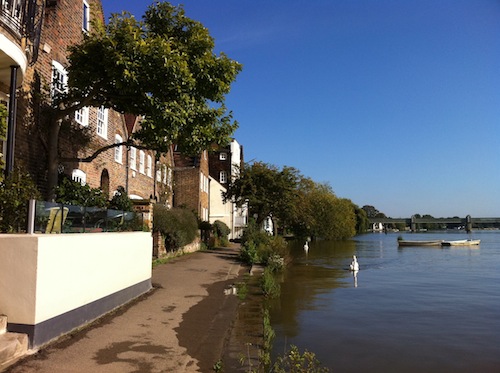 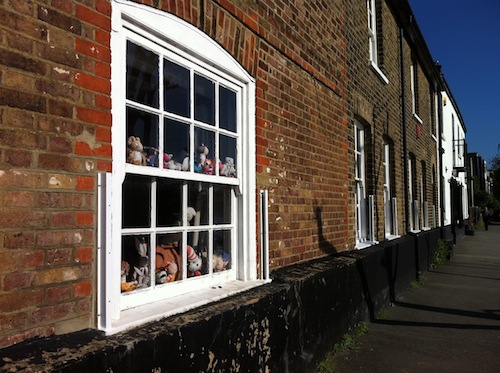 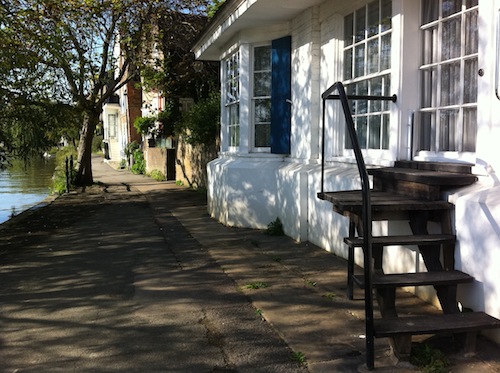 Then there are always unexpected sights - like this enormous dog which was sitting out on the wall inspecting people as they walked by. This part of the river used to have lots of boat building activity and old mooring posts still stand in the river - I think these must be where the barge was moored after which the City Barge, the nearby pub and the middle of the three, is named. Another old favourite is Post Office Alley, very difficult to get a good photo of, and from the river end almost impossible to spot. A tiny dark archway in a house turns into an alleyway which goes up past Post Office House, and a little brick dwelling which we used to think must be the smallest house in the world, back up to Thames Road which runs parallel to the river. The City Barge is just next door. 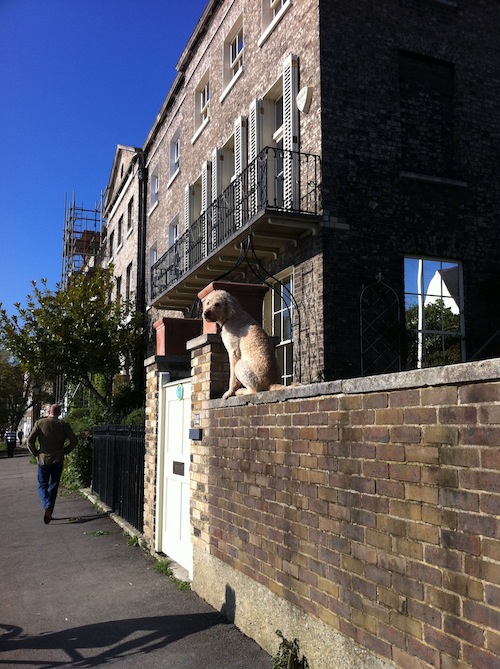 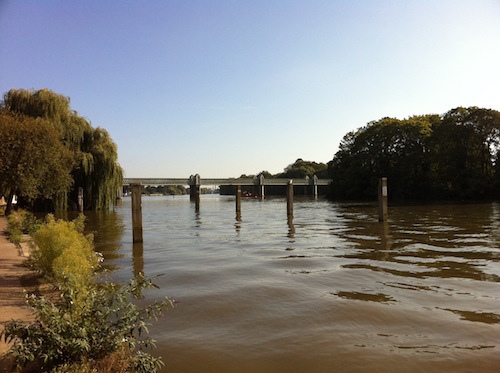 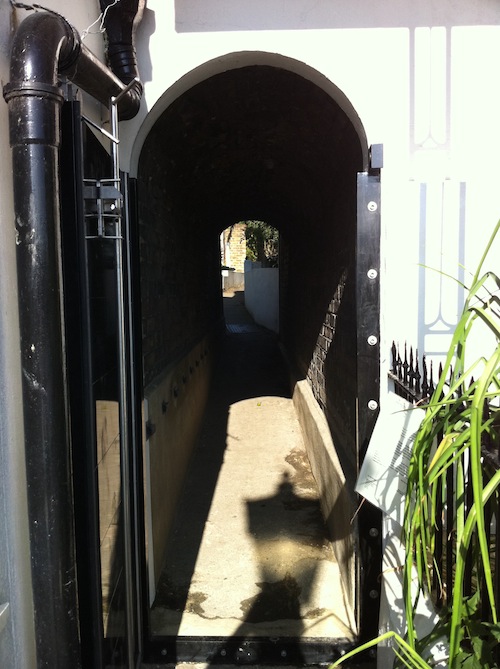 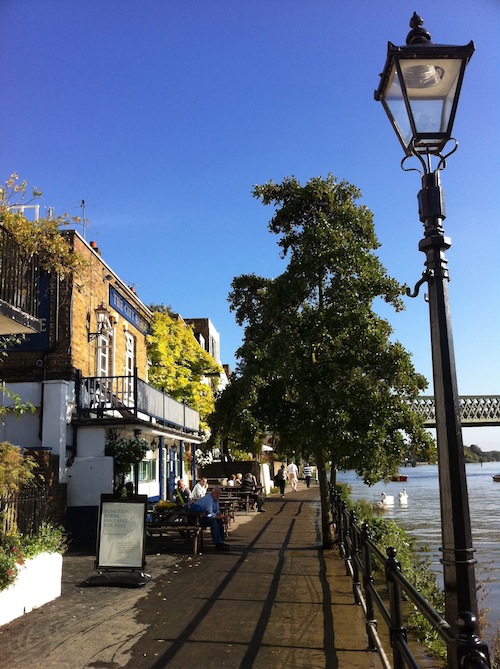 Finally the path goes under the railway bridge (carrying the Overground and the tube between Gunnerbury and Kew Gardens) where the Strand on the Green sailing club is based, and past the Bulls Head, final pub and the one from which, legend has it, a tunnel extended to Oliver's Island which Cromwell used to escape. It seems unlikely given it's some way upstream, but it's a nice story. Being alone I avoided the temptation of a cold beer and walked back along Thames Road, picking up a slightly deformed Solero on the way, which I enjoyed back at the other end of Strand on the Green! 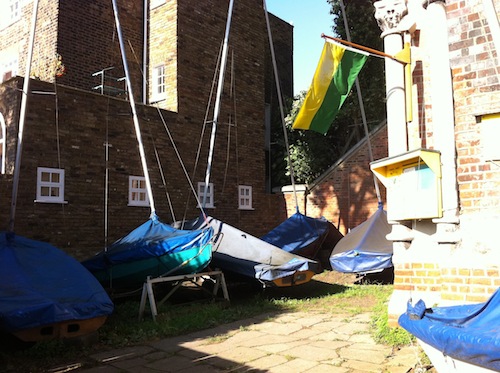 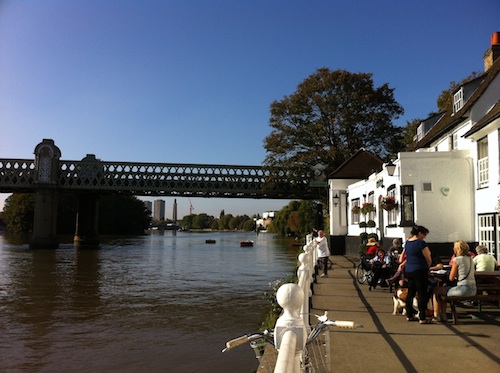 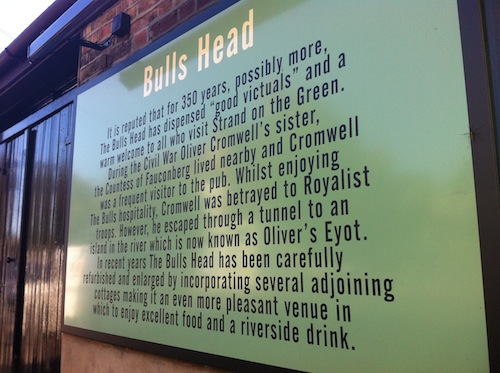 Thanks to Jennie for the suggestion. For anyone who doesn't know this part of London well, it's worth a visit - you can walk the towpath on either side of the river here and in the other direction to Isleworth and Twickenham too, past Richmond where the river stops being tidal and there is the first (or last?!) lock. Just diagonally across the river and on the other side of Kew Bridge from Strand on the Green are the Royal Botanic Gardens - otherwise known as Kew Gardens and also on my list.

Transport is good - Kew Bridge Station is on a branch line to Waterloo, and Gunnersbury or Kew Gardens, as already mentioned, are on the Overground and the District Line, and are probably 10-15 minutes walk away.
An occasional post by Bridget at 4:28 PM

Email ThisBlogThis!Share to TwitterShare to FacebookShare to Pinterest
Chasing: 100 things for free, 100 things to love, the river