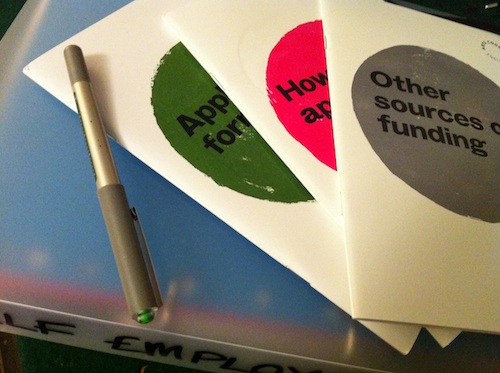 I mentioned back in December that I was starting something up for myself, and trying to become a producer. We're still at very early days with our theatre project. Just as the director and I felt we might be getting the ball rolling a couple of weeks ago - meeting with Arts Council England arranged; funding and performance possibilities identified; exciting and excited creative people lined up - we discovered the rights we wanted were no longer available. Sometimes things just don't work out the way you want them to, but, though I know it's probably sentimental rubbish and more of a trick of the mind than anything else, we do mostly both subscribe to the "things happen for a reason" philosophy and though we might therefore be on pause for the moment, we'll get there somehow some time. Meanwhile, I've been meaning for a while to write a bit about what this process has been like for me. Someone said to me recently that the weird thing about being a producer was that there was no defined role or way of doing it, so I'm hoping that sharing this might be interesting, at least, for others.

The weirdest thing about this producing lark for me is that it's not something I thought I'd ever be quite brave enough to do. I've watched in awe as other people have started up their own projects and had wistful daydreams about how maybe I'd like to be a producer, but underneath I was telling myself that I should know, really, that it would never happen. I don't think of myself as an entrepreneurial self starter type; or as madly cool and creative; I don't have the sort of impermeable self confidence and belief that it feels as though you might need if you're putting yourself out there as an individual or partnership rather than representing a company. Also, a lot of the support and help is also aimed at those under thirty (if not younger) and in many ways it feels as though after that it's too late: you've either made it or you never will.

However, I had a strange old year last year. I've mainly worked in arts education (of various sorts) up till now and though I'd loved it, I could never quite see what came next. In fact I've never quite been able to see what comes next in any job I've done, in terms of sensible career progression, not because there haven't been options but because I haven't quite seen what's the right move. It's why instead I've always slightly reinvented what I'm doing, moved sideways as often as up (something which, by the way, I think has proved useful in the long run). However, I got to a point where I felt as though I was in the middle of a wood and the path had stopped, and I wasn't sure where to go. On the other hand, after I calmed down a bit, I was surer than ever that theatre was what I wanted to be doing. The thing is, I like a map and step by step route instructions but no one is going to give that to you. The time felt ripe to stop playing by some kind of imaginary rules I have in my head.

So: I came back to London where my friends and family are, I finished the Masters I was doing, I got a part time contract at a wonderful theatre company which would give me a bit of an income while I had time to think about what to do next, I started looking for freelance work, and then a friend of mine came up to me and said "would you consider producing this play I'd like to direct?" I said yes even before I'd thought about it, and then I did think about it, and I said yes again.

Now, three months on, I still can't quite call myself a producer because nothing's really happened yet, but what I've realised is that although lots of things about what I'm doing feel scary and perhaps rash, they also make some sense. No-one has laughed at us as we've come in the door and said "what are you doing here?" People have been generally interested, and supportive, and want to hear more. Being 32 doesn't feel old and past it (though there is less specialist support) but as though maybe I've built up some experience and skills which might be worth having. My partner in the project may be my friend, but she's also an experienced director with plenty of work under her belt and clear ideas about what she wants to do and how she'd like to do it.

So yes, it's early days, but this is what I've been doing so far:

Email ThisBlogThis!Share to TwitterShare to FacebookShare to Pinterest
Chasing: theatre