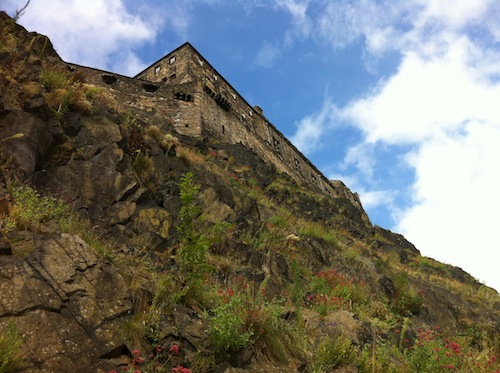 Due to my otherwise excellent accommodation not having wifi (it does have internet, just not wireless, and the owner of the accommodation (my uncle, but not the same uncle as the caravan uncle) quite often seems to want to plug into it (how dare he. In his own house)), and the preponderance of late nights (keeping up with this sentence?) I'm rather behind on blogging about Edinburgh. Not that anyone is waiting with breathless anticipation, but I did intend to write something. I've been keeping notes. So, even though it's Tuesday, here's what happened on Saturday.

I arrived at Waverley and exited the station only to see Daniel Bye stroll past. I hadn't only arrived in Edinburgh, I'd definitely arrived at the Edinburgh Festival Fringe.

I'd not booked much before arriving so had to sort that out fairly quickly, and started with This Hour Only and The Lonely One in quick succession at the Underbelly, Cowgate, before heading off to the nabakov Arts Club where due to my lack of sleep the night before I really didn't last the distance and probably missed out on all the best bits.

This Hour Only was well performed and mostly well written.  It's about a new prostitute giving her first session, which coincides with a young man's first visit, bought for him by his friends for his 21st birthday. The story as it unfolds feels fairly unlikely but then the script makes a point of how unusual as prostitute and customer they both are. It was sweet, and there was some clever rhyming which felt too clever when it was too obvious but really worked the rest of the time. I enjoyed it.

The Lonely One was less successful for me, but that might well have been because the tiredness really caught up with me then and, I have to admit it (and I was in the second row and am pretty sure at least one of the performers would have clocked it: sorry!) I fell asleep more than once. There were lots of experimental techniques; shadow puppetry, mobile lighting, etc; which all felt interesting as concepts but didn't always deliver. The tension, from my admittedly somewhat limited viewpoint, felt as though it was built up over too long a period. Good performances, though, and believable characters. I don't think I can really judge something where I wasn't fully with it, through no fault of the show. 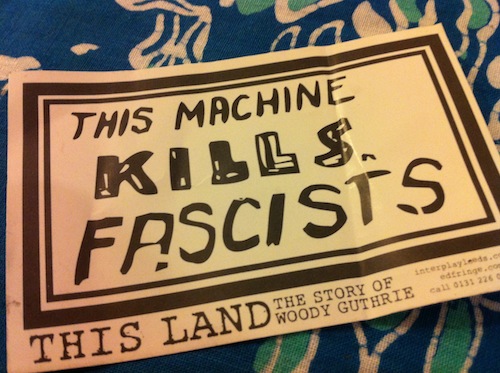 The nabakov Arts Club was fun while I was there and I wished I was more awake and there with a friend or two, to get drunk with and stay out till all hours. It started late (I heard someone from the venue talking about how they had 86 performers. I sympathise), but that was ok because half an hour isn't much in the scheme of 6 hours. Briefly I wasn't at all sure what was going on where and would have welcomed a programme but once I'd got my head round the layout a bit and identified the right rooms that was ok. I heard great music from Interplay Leeds (who are performing This Land: The Story of Woody Guthrie) and got a brilliant fridge sticker which is definitely going on my fridge when I have a fridge. The One Hour Plays did a ten minute play, made in an hour with the collaboration of the audience, which had no tigers in it sadly (though one was promised) but did have a flamenco dancer and was amusing. Then I lasted through some good poetry and comedy in a room that had appalling acoustics and not very sensible layout for getting anyone to shut up and listen, and went home, missing John Osborne, Molly Naylor and Kate Tempest: very foolish I expect but I think I might have gone to sleep again and it really is rude. Once in a day is a misfortune but twice is carelessness… etc.

Day One summary of achievements & highlights