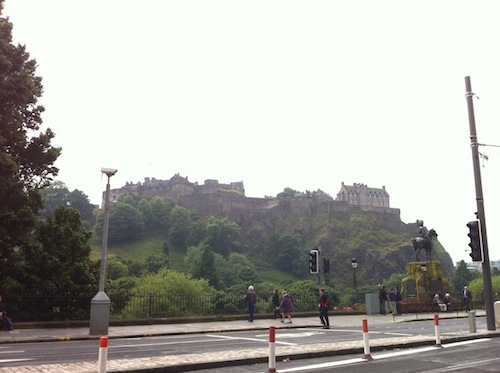 So attempting to move on a bit through my Edinburgh experience (after all, I left on Wednesday): Sunday was relatively sedate. I got up later than I should but made it, just (see below) to Summerhall for Rime.

This might make me sound old (it makes me feel old) but I'm not sure how else to put it: Square Peg are young, good looking, enthusiastic, incredibly skilled and make it seem almost easy. Their acrobatic, dance and aerial skills are amazing and the piece was produced to a high standard, with fantastic sound both live and recorded. I guess my reservation was that it just was a little bit too slick and pretty. For example that mock Victorian look with tan and brown shades, knickerbockers, shirts and corsets is nice to look at but feels clichéd. It was very clear how talented they were but I didn't quite believe them. And particularly when - and this is just me being pedantic - they used granny knots to tie the sails when any sailor would use a reef. I'm interested actually - is this a circus rigging thing? It was consistent, at least.

Still. It was incredible to watch, they gave me an apple (see my previous post, I'm easily bribed), and to have a window open might not have been a deliberate part of what was going on but worked brilliantly - before I realised it gave me goose bumps as I felt the breeze on my neck as a storm gathered in the play. Maybe we should think about sensation effects more often as well as sound and lighting. 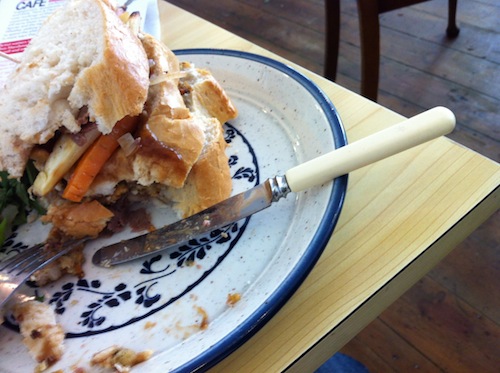 After Rime I popped back to the Hunt and Darton Cafe, in residence on St Mary's Street for the Festival, where I had an absolutely fantastic roast beef sandwich (complete with parsnips, stuffing and gravy - I was unsure, but it was good! - and managed to earn my copy of Forest Fringe's Paper Stages by giving time to an artist/waitress who was asking punters for helpful advice on her career. She seemed pretty sorted actually, but then I know that feeling of still wanting to be told what to do. My only complaint at Hunt and Darton was that the admittedly charming mismatched crockery was completely impractical - my tiny coffee mug had a curved in rim that made drinking from it tricky and my knife did not match up to the sandwich!

I didn't see any more shows on Sunday but very much enjoyed returning for a bit of a look around Summerhall. There are incredible spaces, with many original features from the venue's past life as the vetinary school, and exhibitions, including Figure Studies which are Muybridge-esque films, slowing down of the movement of people so that every movement and ripple of the skin can be observed in fine detail. I also attended the deliberately provocatively titled "Taking On The Boys" talk from Stellar Quines which was really interesting both on women's presence in the industry and their attitude to each other. The basic message was that only 30% of creative theatre roles in Scotland are filled by women, so it's clear that gender is still an issue, but also that people feel quite passionately, and often differently, about it. I'm looking forward to reading the full report from the research they have had carried out.
An occasional post by Bridget at 11:14 PM