January: this month I am mostly seeing... 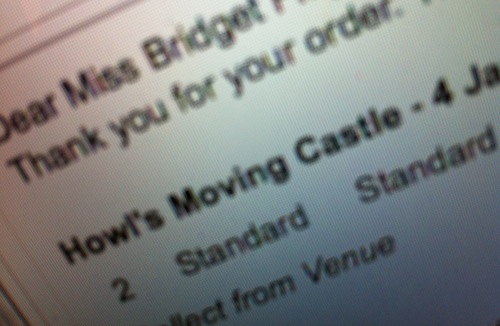 I have a feeling this year theatre will make or break me. On the one hand, I’m going to be attempting to make a go of it as an independent producer (those words scare me terribly but if I say them often enough I might believe in them a bit more) and will be seeing as much of it as I can. I’m back in London and suddenly it seems as though a whole feast of delights has been laid on just for me. However on the other, this may give me indigestion: having got into indulgent habits as a staff member receiving free or cheap tickets at regional theatres I’ve already booked more tickets than I can afford for the first couple of months of 2012 and if I go on like this I may well be bankrupt before the year end. However, until that happens, I plan to enjoy myself. Here's what I'm seeing this month - I think this is the full list but you never can tell.

Interesting in itself for being a rare co-production for the Royal Exchange, I skipped (figuratively. Literally I took the train) up to Manchester yesterday to start my theatre year with this entertaining show. In many ways not really my thing: quite apart from anything else, and I don’t know whether it’s just being from the newly attention deficit generation, I often find what you might call more traditional “plays” – scripted playwright-driven two-act-with-an-interval never-out-before-ten dramas – hard work. I wanted to see this because though recognising it as a very high quality production I was never quite grabbed by The Fahrenheit Twins but have always heard excellent things about Told By An Idiot. So, as I’ve said, I found it entertaining and often extremely funny; I really enjoyed some of the physical comedy, particularly Sophie Russell’s hopeless but fervent dancer, Essie; and the audience were enjoying themselves mightily which, you know, should be high up there as an important thing with something that's meant to be a comedy. Personally, still not quite convinced, but interested to see what comes next.

This is tomorrow’s treat – I was looking for theatre which uses film and projection innovatively and someone suggested this on the new Guardian Culture Professionals Network. Diana Wynne Jones is probably my all time favourite author (if you haven’t read her yet, please do right now, and the book of this name, also adapted for film by Hayao Miyazaki, the director of Spirited Away, is a good one to start with) so I had to go anyway, but I also checked out some film footage of the creative team's last project The Ice Book and was intrigued. Haven’t been to Southwark Playhouse before yet either so all the more reason.

I was given the opportunity to book for this, the end result of an intergenerational project about people who experienced the Blitz, alongside the Ages and Stages conference on intergenerational theatre. I’m going to that because I'm keen to do more intergenerational work at some point – excited, for example, that Rosemary Lee is on the panel as I thought Common Dance in 2009 looked like a really excellent piece of work – so this will be interesting.

Well, I have to, don’t I, given any possible chance? After all the reviews about Mark Rylance’s performance in particular and what everyone’s said? And I almost left it too late.

I’ve always been intrigued by how Kneehigh balance their really local origins – which still seem core to what they do - with being a professional and nationally (internationally?) successful theatre company. I’ve also wanted to see something by Little Angel for ages. I haven’t seen a lot of puppet theatre but would like to, and from what I’ve heard this should be really good.

More and more I love physical theatre – if I was a performer myself this is what I’d like to do - and Frantic Assembly are so good at it. Have heard great things about Lovesong. The company are also dead nice. Not important for the quality of the theatre – arguably, anyway - but always good to know.

I'd like to see these too but not sure I can...

I don't know that much about dance (though this isn't a dance piece, by the way) but I do know Shechter is a brilliant choreographer: I saw a couple of his pieces in Plymouth. I was impressed by the total muscle control of the dancers and exhilarated by the music. I also really liked the way he thinks so carefully about the audience experience of the work as well as the work itself: he uses very simple things like house lights and blackouts to manipulate this so that one moment it is as though you're watching a film and the next you're ultra aware you're in a theatre with a live experience. More recently I really enjoyed his audio piece for Fuel’s Everyday Moments series, in collaboration with the Guardian: I really recommend experiencing it particularly if you quite enjoy dancing with your eyes shut and losing yourself to the moment. You can also read what he says about it here. So, this musical collaboration with Gormley is a step in a different direction which I’d like to hear, though I’m not sure if I’ll be able to this time round, at least (the money thing again, oh and time).

Mainly because I read a lovely article on Exeunt by Tom Frankland on working with his father. Again I’m not sure I’ll make it, but I’ll be sorry not to.
An occasional post by Bridget at 12:15 AM

Email ThisBlogThis!Share to TwitterShare to FacebookShare to Pinterest
Chasing: theatre