I met a friend of mine on the South Bank on Saturday and we immediately regretted it. She had her baby with her in a pram and the river bank was packed with people out to see the Christmas markets, or pose with the "characters" (why on earth? Vikings, Mickey Mouse..) and it was hard work manoeuvring through them. We did pause to enjoy a cup of Gluhwein though the whole thing does make me wonder why we have to pretend to be Germany to have Christmas markets. What happened to mulled wine and why the hideous fake chalet huts? Sigh, bah humbug, etc.

Anyway for some respite we went into the Southbank Centre, that megalithic arts centre that consists of the Hayward Gallery, the Royal Festival Hall and the Queen Elizabeth Hall. We found our way to the badly signposted and incredibly badly positioned lift on the river side of the building, in a corner accessed by a narrow corridor around the side of a restaurant with a column and a cashpoint queue blocking the way. I've always found the Southbank Centre rather confusing to get into.  Still, it was worth it once we were there. 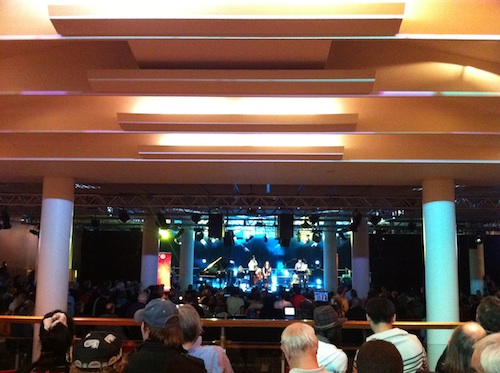 The first fantastic thing about the Centre is that you can pretty reliably guarantee there will be something going on to hear or look at. This weekend there was free live music happening in the Clore Ballroom as part of the London Jazz Festival. It's a crazy place, really, with an amazing potential therefore for events. It's open to the foyer on Level 2, albeit down some stairs, so that you can have a seated audience who feel as though they're in a separate space, but also anyone wandering past can see what's going on.

There are numerous exhibitions taking place, too, including one of artwork by prisoners. We had a look at the World Press Photo exhibition, much of which was rather horrific but, probably, necessary in some sense, photographs of war and suffering. My favourite by contrast was a wonderful shot by Andrew McConnell of a woman practising the cello, divided from a rundown street in the Congo by only a sheet of green corrugated plastic. Apparently she is a member of Central Africa’s only symphony orchestra, most of whom are self taught. It is a wonderful image. 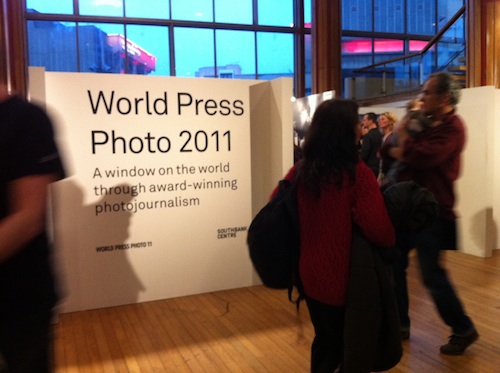 The downsides were that they'd not noticed it was a mild day and the heating was on full blast - we had a rather hot baby getting increasingly unhappy so couldn't stay as long as we wanted to - and it's confusingly laid out, but all in all, I like the Southbank Centre. It's such a basic thing about being an accessible, welcoming arts space: that when people come in there will be something to do and a reason to be there, and on Saturday people had come in their droves. Not all of it is in the Centre's hands, either. There have been various attempts to close down the skate park underneath and snotty criticisms of it by art critics but it is, fabulously in contrast to the smart glass fronted brand heavy shops and cafes next door, still going strong. I don't think good art is created in some rarefied place where people don't dare to enter. That kind of art doesn't engage with reality, with humanity, in a way which is meaningful to me. Of course there is more to it than allowing the bustle of Londoners and tourists from tacky Christmas markets spread into your foyers, but it's all part of it.
An occasional post by Bridget at 10:22 PM