I've not got around to writing this post for a while and I think it's because, you know, the National Portrait Gallery is fab and all that but it didn't quite have the thrill of discovery of some of the other places I've been so far. This was perhaps particularly because of the unfortunate arrival, while I was going round the First Actresses exhibition, of a class of either sixth formers or  new undergraduates (young, reasonably trendy, monosyllabic) and their very loud, confident, slightly patronising teacher, whose voice echoed around the space and made it really difficult to focus on what I was looking at. In Italy tour guides were banned from a lot of places, a policy I liked.

However, I'm starting near the end. I began by getting off the tube at St James's Park. One of the things that I think a lot of non-Londoners don't realise is how walkable the city centre actually is. The tube map, though beautiful, is quite deceptive. St James's Park tube station in a way isn't the best place to start, despite its name, because it brings you to the middle of the south of the park rather than to one end, but it was a bit of a last minute thought, when I realised that I could do a good route through the park, up Whitehall and across Trafalgar Square to the gallery. The park was lovely, the leaves were all autumnal, the pelicans were unexpected but there were a few too many tourists about. 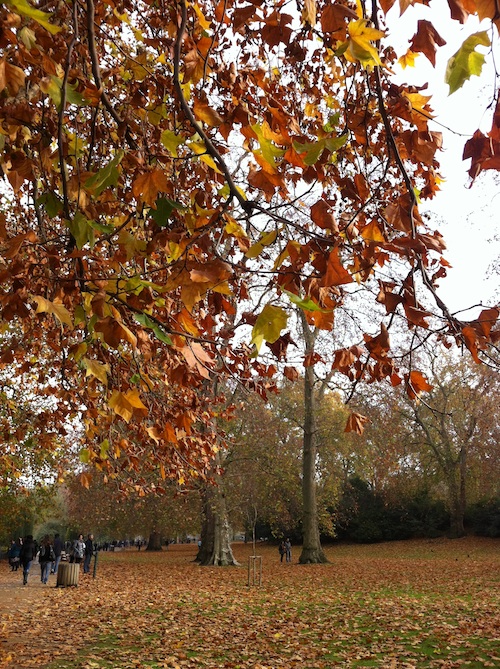 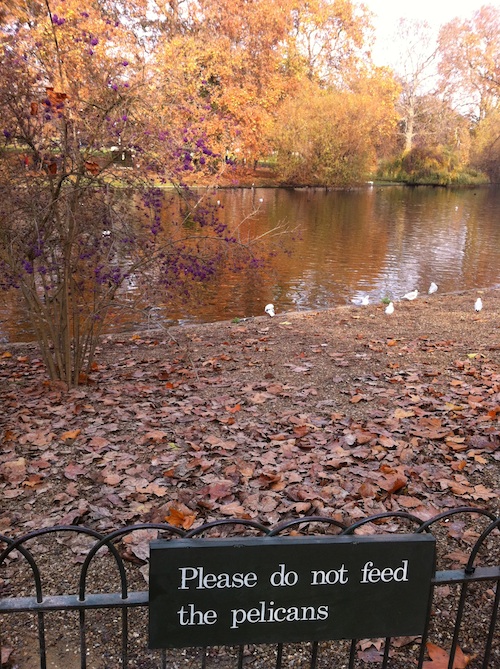 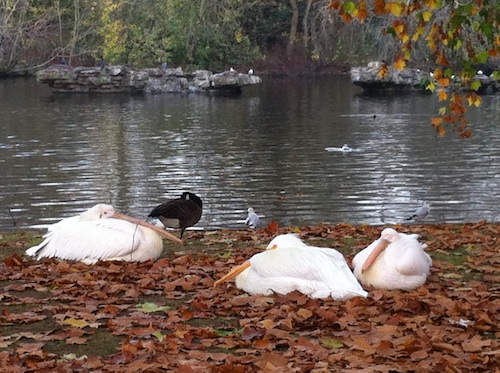 Whitehall was a bit disappointing too. I don't need all the fingers on one hand to remember the number of times I've knowingly walked up Whitehall, which is perhaps a bit rubbish for a so-called-Londoner, but I'm quite glad I haven't bothered more often. You think it's going to be so much more impressive than it is. I was struck by the number of red telephone boxes around the HM Revenue and Customs building. Do people particularly need to make phone calls when coming out of there or is it just to cater to the tourist photo opportunities? There were lots of those happening. My favourite things were these slightly random but impressive wrought iron gates and the memorial to the women of World War Two which I'm not sure I knew about before: shame it's in the middle of a busy road like the Cenotaph, but rather beautifully evocative with all the empty uniforms hung up on pegs: not only symbolising the work done by women during the war but also the way in which many of them had to give up those jobs again afterwards, probably mostly reluctantly. 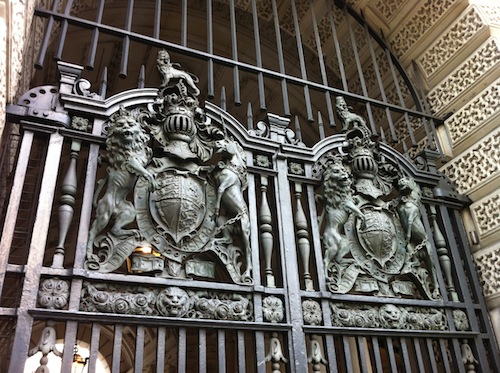 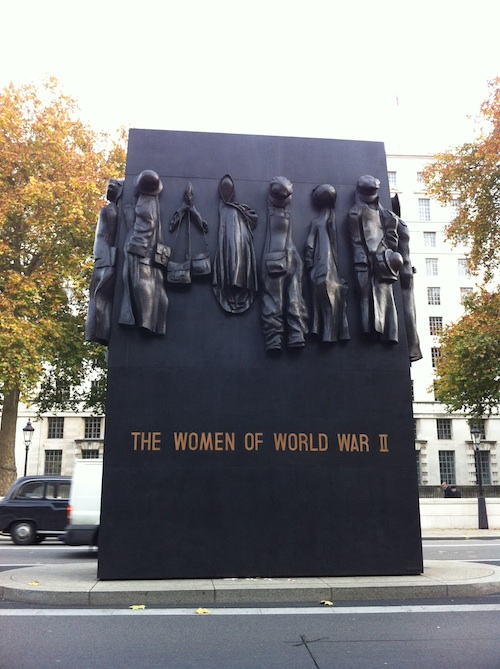 Making it to Trafalgar Square I managed to get a rare photo of one of the lions without a person on it or in front of it. Thinking about it I should have checked out the Fourth Plinth - I think it's the Ship in the Bottle at the moment, and I do like the contemporary art concept - but instead I paused for some lunch and a quick squiz at St Martin's. There's a church which is successfully engaging with what's going on around it, frequently hosting demonstrations on its steps and running a programme of support for the homeless, without sacrificing some revenue opportunities like the Cafe in the Crypt. 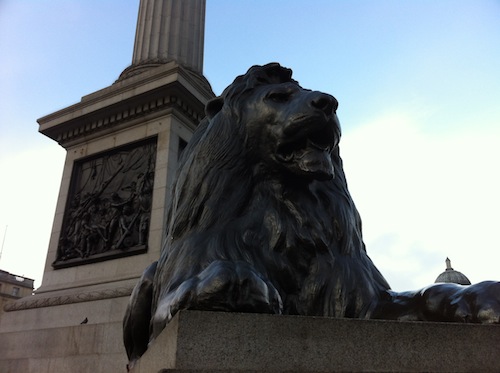 Finally I got to the National Portrait Gallery. I do like it very much: I'm a fan of portraits generally and it definitely bears repeat visits as there is so much there, and the exhibitions change regularly, particularly downstairs with the modern sections. I've been quite recently (to see the BP Portrait Award as also recommended by Lucy, which was fab and I'd have willingly gone to again but has now finished) but it didn't matter at all. Looking at the website there is a lot that looks interesting which I didn't see. Though of course the main part of the gallery is free and I'm not normally a big one for paying for exhibitions if I don't have to, I did fork out £2 for the Taylor Wessing Photographic Portrait Prize, which was really interesting even if I do slightly agree with the controversy over the winner, and also for the First Actresses exhibition as already mentioned, more expensive at £12. I wouldn't necessarily recommend this to everyone unless you're particularly interested in the subject, even on days when annoying teachers aren't around, but I did my undergraduate dissertation on the actresses so felt it was worth a look, and there are some lovely portraits. I particularly liked the couple by Reynolds and one of Lavinia Fenton. I was also quite surprised by how many of them went on to become writers and playwrights: I've read about Mary Robinson but didn't realise there were quite a few others such as Elizabeth Inchbald and Sarah Siddons. You hear more often either about their scandalous reputations or how they left the stage when they got married: perhaps typical of how women have been portrayed in history.

I did also go up to the top floor restaurant as recommended, and the view did indeed look quite amazing over the rooftops towards Trafalgar Square on a rather misty day, but it seemed a bit too posh to be worth it for a solo cup of tea. The menu looked good: perhaps somewhere to go for a treat before the theatre? Not really for someone trying to rediscover London on a budget. Otherwise, not too bad an afternoon on balance: thanks Leah, Rose, and Lucy. 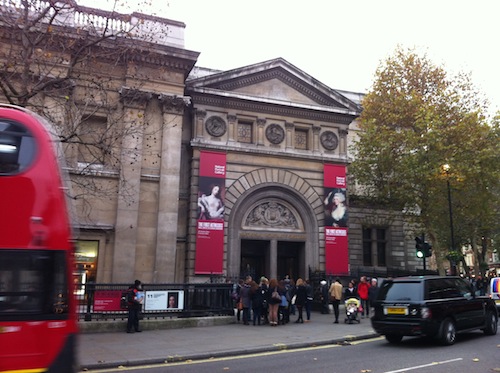 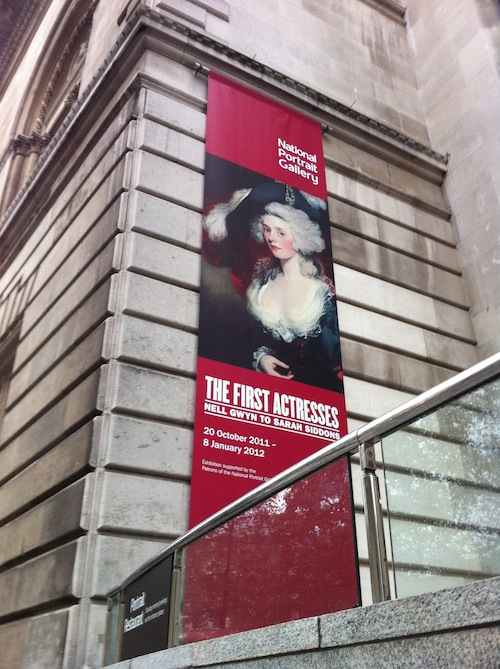